In an exciting finish that left many in the near sellout-crowd standing throughout the final 15 laps, Honda-powered Scott Dixon battled defending series champion Ryan Hunter-Reay throughout the closing stages of Sunday’s Honda Grand Prix of Alabama, coming up just six-tenths of a second short of the victory at the checkers.

After starting on the outside of the second row, fourth, Dixon lost two positions at the start while avoiding contact with Will Power, who had gone wide and briefly off-track at the first turn. He remained near the front of the field throughout the first two-thirds of the 90-lap contest moving from sixth to second and back to fourth as several other competitors – including Power, Helio Castroneves and fellow Honda driver Simon Pagenaud – committed to “off-sequence” pit strategies in a bid to move to the front. 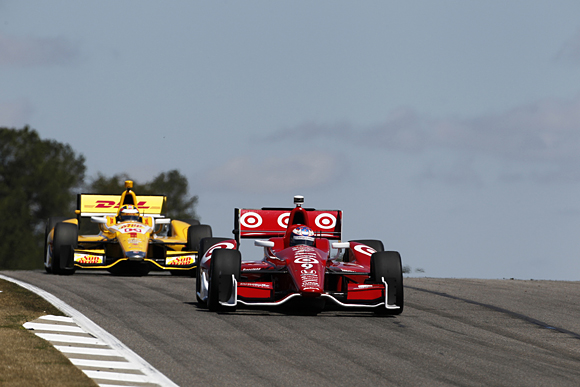 After the final round of pit stops on Lap 70, Castroneves led, followed by Hunter-Reay, Dixon, Power and an impressive Charlie Kimball, having his best run since finishing second at the Honda Grand Prix of Toronto in 2012. Hunter-Reay, and then Dixon, passed Castroneves by Lap 76, and for the remainder of the race, Dixon closed in on Hunter-Reay, but was unable to get by.

It was Dixon’s fourth consecutive second-place finish in the four-year history of the race which, coupled with a fifth-place result at the season-opening Honda Grand Prix of St. Petersburg, puts Dixon second in the drivers’ championship, just nine points behind early-season leader Castroneves.

Alabama native, Auburn graduate and sports legend Bo Jackson, a former Heisman trophy winner and the first athlete to be named an “all star” in both Major League Baseball and the NFL, led the field prior to the race start in the two-seat Honda IndyCar driven by Indianapolis 500 champion Arie Luyendyk. For more information on how you can receive the ride of a lifetime in the Honda Fastest Seat in Sportssweepstakes, go to http://www.shophonda.com.

Behind Dixon, Kimball led three laps today and passed Will Power – a two-time winner at Barber – to finish fourth. Pagenaud recovered from a disappointing 13th starting position to finish sixth for Schmidt-Hamilton Motorsports. Justin Wilson recovered from a problematic first pit stop – which dropped him from fifth to 19th when the car was dropped off the jacks before the tire change was completed – to finish eighth; while second-year Honda-powered racer Josef Newgarden finished a career-best ninth for Sarah Fisher Hartman Racing.

After opening the 2013 season with a pair of races in the Southeast, the IZOD IndyCar Series now goes cross-country, continuing in two weeks time with the April 21 Grand Prix of Long Beach in Southern California.