After a troubled qualifying that left him starting from an uncharacteristic 20th on the grid, Target Chip Ganassi Racing’s Scott Dixon charged through the field to run as high as fourth on Sunday at the Honda Grand Prix of St. Petersburg, then held on to finish fifth despite a broken exhaust wastegate in the closing laps, passing Simona de Silvestro in the run from the final corner to the checkers.

Dixon gained 10 positions in the first segment of the season-opening IZOD IndyCar Series event, and broke into the top five on Lap 75 of 110. Five laps later, he passed Marco Andretti for fourth. On Lap 85, Dixon began to feel the effects of the failed wastegate, and fell back behind Andretti and Tony Kanaan. But on the final lap, Dixon caught a slowing de Silvestro to claim fifth in a side-by-side finish. 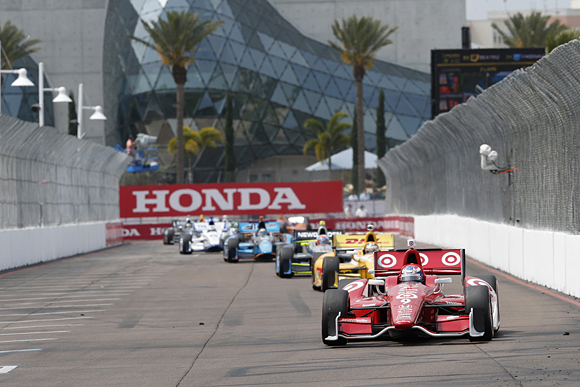 Takuma Sato started on the outside of the front row, second, and ran just behind early leader Will Power in the opening laps. But his A.J. Foyt Racing Honda Dallara received minor front wing damage that slowed his pace as Sato fell to 13th mid-race. A late-race change to a new nose and front-wing assembly restored the handling, and Sato recovered to finish eighth.

A promising debut from IndyCar rookie Tristan Vautier came to a halt on Lap 69 after he had run as high as fifth, when a broken exhaust ended his race. A similar problem also eliminated his Schmidt Peterson Motorsports teammate, Simon Pagenaud, earlier in the contest. 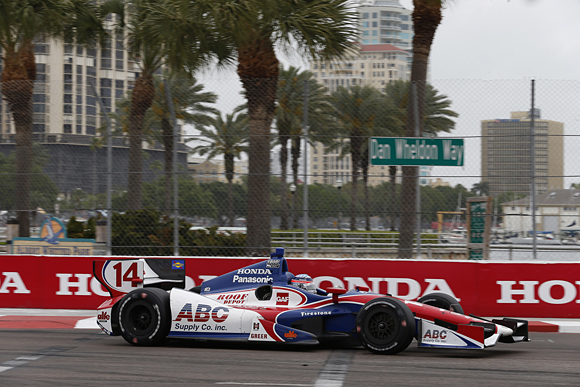 The IZOD IndyCar Series now takes a week off for the upcoming Easter weekend, then resumes with the first permanent road course race of 2013, the April 7 Honda Grand Prix of Alabama, at the scenic Barber Motorsports Park near Birmingham, Ala.

Scott Dixon (#9 Target Chip Ganassi Racing Honda) started 20th, finished 5th:
“After our struggles earlier this weekend, the car was really good in the race, especially on the ‘red’ [optional, softer tires]. On the reds, the balance was really good. We made up a lot of ground for the first two-thirds of the race, but on that last caution [Lap 85], it looks like we broke the left-hand side [exhaust] wastegate. That cost us a lot of power and I wasn’t able to move up. On the final laps, it seemed like some of the cars [in front] started to come back a bit, and everyone was all over the road on the last lap, so we were able to get around Simona [de Silvestro] right at the finish.”
Takuma Sato (Driver, #14 A.J. Foyt Racing Honda Dallara) started 2nd, finished 8th:
“It was a tough race, a very busy day. The race started well for us, but on the second re-start [on Lap 26] there was a contact in front of me and unfortunately, it damaged my front wing. The car was not as good after that, and made it a bit difficult for us. Later in the race, we were able to change the nose, and then I was able to pick up the pace and regain some positions. That was good fun. It was not a perfect day for us, but we were able to run up front for most of the weekend and I think that is a good sign for us for the rest of this season.”