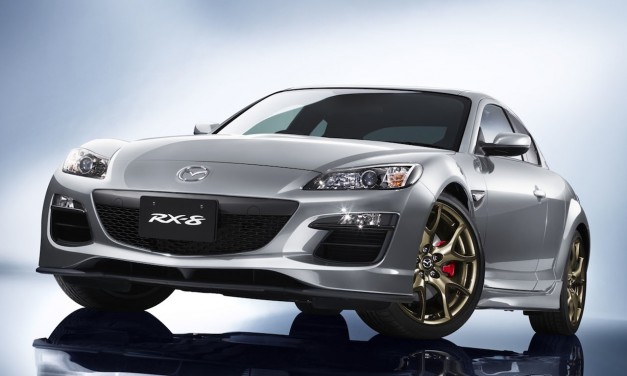 “Mazda’s iconic rotary engine recorded its famous victory in the Le Mans 24-Hour endurance race 20 years ago,” said Takashi Yamanouchi, Mazda’s Representative Director, Chairman of the Board, President and CEO. “Throughout 2011, we have been celebrating the 20th anniversary of that victory by demonstrating the winning 787B racecar at Le Mans’ Circuit de La Sarthe and various other events around the world. At each one, the screaming rotary engine and the sight of the 787B have enthralled everyone from young children to race fans who witnessed its victory in 1991. These events have been a powerful reminder of the widespread passion for the rotary engine. Although RX-8 production is ending, the rotary engine will always represent the spirit of Mazda and Mazda remains committed to its ongoing development.”

The car, based on the Type RS 6-speed manual (or Type E automatic) comes with bronze 19-inch wheels, leather trimmed red and black interior, a pair of Recaro seats, red brake calipers and other smaller visual details. Mazda continues to state that development of the rotary engine will not cease, so we can only hope to see more of these Wankel powered sports cars in years to come.